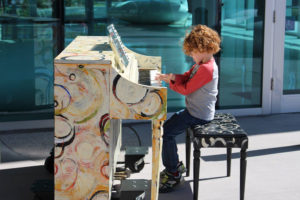 Sarasota Keys is a highly popular interactive public art project that combines music and art to beautify and energize the streets of downtown Sarasota. The project was created by the Arts and Cultural Alliance of Sarasota County and developed through a unique partnership that involved city government, local businesses and the arts community.  Unique and artistically painted spinet pianos were available for the public to play, explore, learn, practice, and most importantly, enjoy. With the combination of local businesses, local artists, and local arts organizations, the Sarasota Keys piano project celebrated and enlivened the vibrant downtown Sarasota area and its powerful arts and cultural community. The program has gained international recognition through social media, and several communities throughout the country have launched similar programs.

Sarasota Keys is not currently active due to wear and tear on the instruments, but other interactive public art projects are on the drawing board and will always be a part of the mission of the Arts and Cultural Alliance.

Richard Capes has been recording the character and beauty of Sarasota in his paintings and drawings for more than 35 years, and has a special love for Siesta Key. Before arriving in Sarasota, he held positions as Assistant Professor of Art at both The University of Southern Mississippi in Hattiesburg, and Morehead State University in Kentucky. He has been active in charity and non-profit organizations as The Light House of Manasota, he also exhibits at galleries and businesses in the area. The Gulf Coast Journal by Jack Perkins filmed him while creating a painting for The Settlers Cottage in Phillippi Park. Richard was inducted into the Video Hall of Fame in 1998. He obtained both Bachelors and Masters degrees in Art and Art Education from The University of Georgia in Athens. 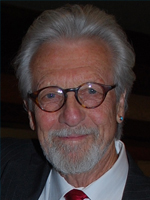 Jack Dowd is a contemporary social realist, a connoisseur of American types, the boisterous, eccentric, innocently hilarious individuals who rarely become the subject of art. Dowd celebrates America’s idiosyncratic extended family in his ongoing series of full sized figures…with affection, humor and satiric wit. Dowd’s work has been shown in galleries and museums across the U.S. and his sculpture is in many corporate, public and private collections. His solo exhibitions include the John & Mable Ringling Museum of Art in Sarasota, the Jacksonville Museum of Art, Museum of Fine Arts in Tallahassee, West Bend Art Museum in Indiana and the Tribute Museum in NYC. 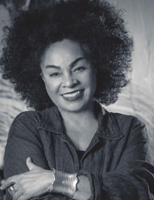 Gale Fulton Ross was born in Medford Massachusetts in 1947. She pursued her passion for art by studying at the Vesper School of Art, Massachusetts College of Art, and the California College of Arts and Crafts. Early in her career, Fulton Ross expressed herself figuratively. Her paintings articulated the turbulence of the civil rights struggle. Fulton Ross’ work blurs the lines between figurative and abstraction. Her body of work includes commissions for many celebrities and politicians. Gale’s work is in museums nationally and internationally as well as in many public and private collections. She now brings that empathetic creativity to the Fulton Ross Group, a collaborative of artists, architects and engineers dedicated to the development of public art as a means to engage and enrich local communities, particularly those that are underserved by the arts. “I focus on producing works that engage and inspire. I am an advocate for Artists and my vision is to make art accessible and foster community involvement in the process.”

Award-winning visual artist, Lori Loveberry George is a 2008 graduate of Eckerd College with a BA in visual art, and a 1983 graduate of Ringling College of Art and Design, a printmaking major. Originally from Michigan, she attended Kendall College of Art and Design in Grand Rapids. She is a teaching artist with Sarasota County Schools and Sarasota County Libraries, and a member of the Association of Florida Teaching Artists (AFTA). She is actively involved in the community, participating in the Sarasota Chalk Festival, and local school art projects. Lori owns a decorative painting business in Sarasota, Florida, and continues to create and teach visual art at her Sarasota studio. “I’m passionate about exploring the essence of the human condition through improvisation and spontaneity of emotive line making and the study of form.”

Tim Jaeger studied Fine Art at the Ringling College of Art and Design, Jaeger decided to remain in the resort coastal town of Sarasota after earning his bachelors of arts, where he now works and paints. Jaeger’s work is featured across the country, but he’s more than an artist. Though poised with paintbrush in hand, his creative mind expands into the business and politics of Sarasota’s visual arts while working towards engaging the community and fostering new artistic partnerships. “As the painter, I act as the instrument of unleashed powers which are directed from both the conscious and subconscious. This is expressed through a violent use of paint applied and assaulted onto a two dimensional surface. This expresses directly and immediately all the intensity of living, explainable only as the unconditional self-expression of a creative personality, while utilizing the rooster in an expressive capacity of simple pictorial means.”

Cassia Kite was born and raised in Auburn, Nebraska and attended Northwest Missouri State University earning a B.F.A in painting and sculpture, along with a B.S in Art Education. In the summer of 2006, Kite moved to St. Petersburg, FL from Atlanta, GA to work with both the Museum of Fine Arts and the Salvador Dali Museum. As an art educator, Kite has had the experience of teaching K-5 art within the Pinellas County Public Schools between July 2006 and June 2010. She completed a Masters in Curriculum and Instruction, with an emphasis in School Improvement, Teacher Leadership and Technology at the University of Florida in December 2010. Currently, Kite is the Painting, Printmaking and Modern and Contemporary Art History Instructor at IMG Academy in Bradenton, FL. As a working artist, Kite resides in Sarasota, FL where she continues to work in her home studio. She also resides on her family farm in Southeast Nebraska during the summer and spring months where she works in her summer home studio. She is currently represented by State of the Arts Gallery, which is located in downtown Sarasota, FL.

Steven Strenk currently works in the Visual Performance Arts Magnet Program at Booker High School and Ringling College of Art. He is responsible for various courses which include drawing, painting, and 3-dimensional. Steven’s work has appeared in numerous group shows throughout Florida, as well as out of state. He is part of sARTq, a circle of Sarasota artists engaging the community through unique art experiences. He also has works in various private collections. “My finished work is the effect of exploring various creative processes to reach a final arrangement. I rely on our desires for beauty and intrigue, which allows me to delve into the relationship of the real and the abstract, re-enforcing a conversation between color and texture. My relationship with my children has been influential to my love for playful and active involvement in creation. My art has taken on an unrefined quality, stressing the connection between final image and the physical act of formation.”

“What a perfect ending to my day. I think this is marvelous. I only wish I was a pianist so I could play.” — Mary Powers-Boss

“There can be nothing better than filling the streets of Sarasota with good music. As a piano teacher, I think a lot about how to get children inspired to play the piano. It’s healthy for kids to see adults playing these pianos and exposing them to music of any sort.” — David Ohrenstein

“I work downtown, and I was just wandering around looking at the pianos because I’d heard that they were out here for people to play. I guess sometimes my wife gets annoyed that I play in the house, so I thought I’d play outside.” — Kevin Lo

“Sarasota’s love of the arts is inspiring the musician in all of us. “It inspires people to do what they want to do.” — Breezie

Pianos Hit the Streets of Sarasota