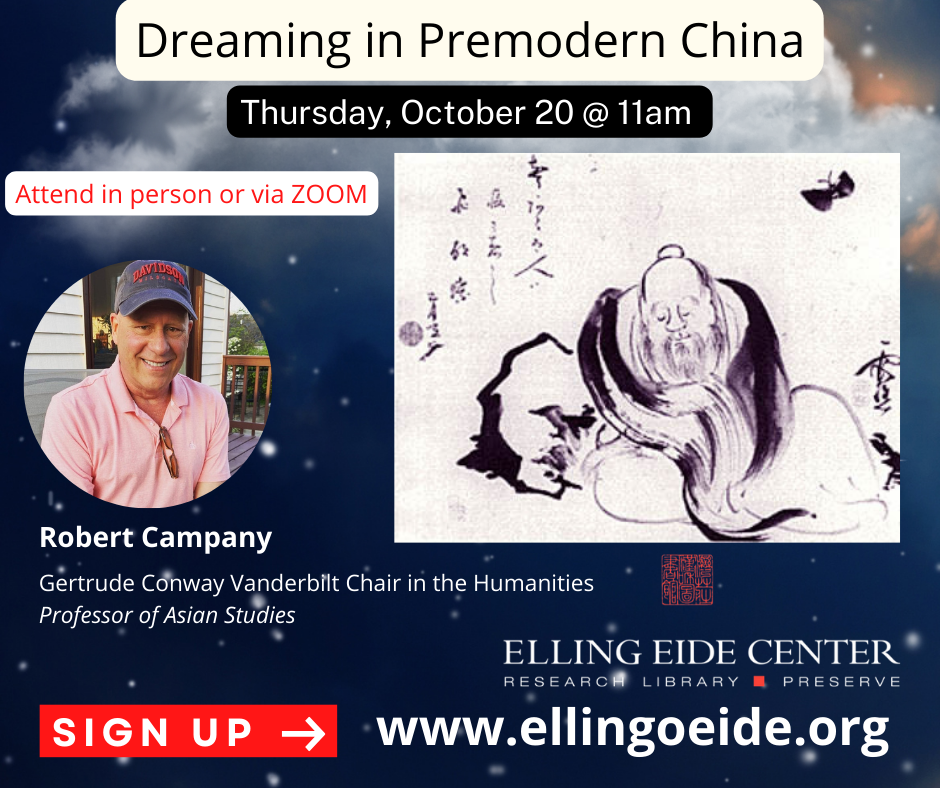 This lecture will provide an accessible overview of how Chinese people in ancient and medieval times thought about and responded to dreams.

This lecture will provide an accessible overview of how Chinese people in ancient and medieval times thought about and responded to dreams. Touching on a wide range of texts, from anecdotes, histories, and treatises to Daoist and Buddhist scriptures, the talk will show that there wasn’t just one concept of what dreams were, but several. And each concept evoked a distinct type of response. Some dreams were interpreted diagnostically as indicating latent medical or karmic problems. Some were deciphered to predict future events. Some were treated as real, face to face encounters with nocturnal visitors, from whom the dreamer might receive instruction or counsel. And some were seen as unwelcome contacts with hostile beings. Examples will be introduced to illustrate these various cultural logics at play and what difference they made in people’s lives.

Robert Campany: I’m a historian of Chinese religions (particularly in the long period from 300 BCE to 800 CE) who approaches this topic with an interdisciplinary set of conceptual tools, questions, and approaches. My publications to date—six books (plus a manuscript currently under review), two co-edited volumes, and more than forty articles and chapters—have examined topics and texts spanning the Daoist, Buddhist, and Confucian traditions in China as well as popular practices. I’ve returned repeatedly to texts of the anecdote genre to see what we might learn from them about religious worldviews. Some of the aspects of religion explored in my research include death and the dead, notions of the afterlife and of immortality, local gods and temples, miracle tales, narratives of holy persons, the nature of interreligious interactions, ideas and practices involving Daoist and Buddhist scriptures, and intersections between religion and dietary regimens. Recently I’ve also investigated ancient and medieval notions of what happens when we dream, methods for interpreting dreams, and how dreams were responded to by practitioners of a wide variety of self-cultivational disciplines. One of my current projects is an investigation of the complex relationships among human and other types of selves as depicted and imagined in a wide range of texts.