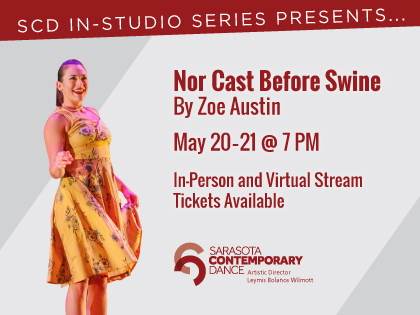 Nor Cast Before Swine

I originally had the idea for this piece back in 2014 when I was attending New World School of the Arts. I then continued to re-create and expand my idea and bring it to the stage for the “Voices” show with Sarasota Contemporary Dance in 2019. During the process of choreographing both pieces, I was extremely fascinated with contrast and how two things can be so strikingly different yet coincide so well. I continued to keep that concept in the “Voices” show and throughout that process, I was able to add another layer to the piece by developing characters and creating a narrative between the dancers and the props that were being used. It created a different texture and storyline then was originally done that provoked the audience to have contrast and emotions as well, which I quite love. I believe that this play on the audience’s emotions is why the piece was received so well and why I was chosen to create another work for the in-studio performances. I still feel as though this piece hasn’t made its final stamp just yet, which is why I’ve decided to expand even further. I believe there’s still a lot to be said within the dancer’s characters in the storyline that has been created. The piece is just the middle chunk of a story and it’s missing the past and future, which I plan to fill in, in this final version.

Zoe Austin (Dancer) was born in Montreal, Canada, and raised in Sarasota, FL. She attended New World School of the Arts where she humbly graduated as valedictorian with a BFA. She is trained in ballet, Horton, Limón, and Graham techniques and was honored to perform works by Michael Foley, Robert Battle, Bill T. Jones, Sean Curran, and Darshan Singh Bhuller while also creating and performing works of her own. In the summer of 2015, she received the Rosie Herrera full-tuition scholarship to attend the American Dance Festival, working with artists Jennifer Nugent, Pamela Pietro, and Sara Procopio. Zoe is currently residing in her hometown of Sarasota, FL, where she has started a family of her own and gained a new family in SCD. This is her second season with the company and she is beyond blessed and excited to continue her journey and growth as an artist.