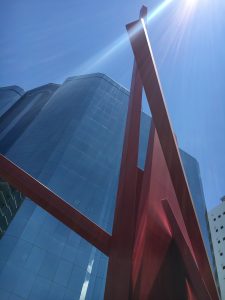 John Henry’s bright red 70 foot sculpture ‘Complexus’ was only meant to be in Sarasota during the 2011/2012 Season of Sculpture. However, a group of community members felt that it belonged here and in less than a year they raised $550,000 to purchase the sculpture and donated it to the City of Sarasota in January 2013.

Thanks to the dedication of the Sarasota Public Art Fund, ‘Complexus’ continues to grace the corner of Tamiami Trail and Gulf Stream Drive. The president of the organization at the time, Thomas Savage, stated, “It looks as if it was made for that spot, so much public art goes unnoticed. Not so with ‘Complexus.’ You can’t miss it.” 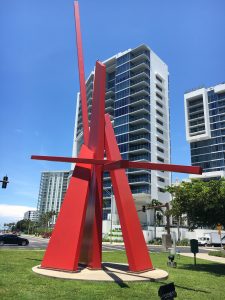 In artist John Henry’s statement on his website he says that, “All of my public work is designed with the idea that it will be viewed by and interacted with the community, and also with the intent that it will become a central element to the people’s daily lives and existence.”

‘Complexus’ has certainly accomplished those goals here in Sarasota.