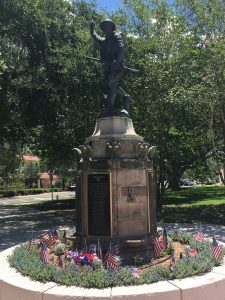 The original ‘Spirit of the American Doughboy’ was created in 1921 by Ernest Moore Viquesney to honor the veterans and casualties of World War I.

Doughboy is an informal term for members of the United States Army or Marine Corp. The original statue is in Nashville, Georgia, however the sculpture became such a beloved icon of the era that it was mass produced throughout the 1920’s and 1930’s as monuments and miniatures. 150 copies were created during this time (it is estimated that 134 of those remain) along with thousands of statuettes and lamps. 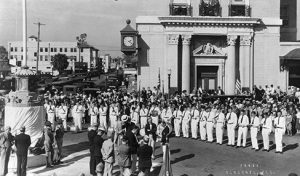 Due to the Great Depression, Sarasota did not acquire an original ‘Doughboy’ as they had intended, but they did have a World War I memorial. This memorial was designed by Clare Hosmer and dedicated in 1928. It stood in the roundabout at the point of Five Points Park and incorporated a flagpole that had been donate by Bertha Palmer Potter at the beginning of the war. In 1954 that monument was moved to its current location on Gulf Stream Ave. Bronze plaques were added in 1960 with the names of the Sarasota men and women who had been killed in combat in the wars since WWI.

70 years later Sarasota finally got its ‘Doughboy’! In 1998 the City of Sarasota commissioned local artist Frank Colson to create a ‘Doughboy’ which he made from molds of an original Viquesney in Clearwater, Florida. 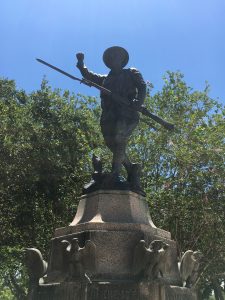 The story of the Sarasota War Memorial and Doughboy on Gulf Stream Avenue is a beautiful representation of the enduring value of public art and its ability to evolve with the community.