When John purchased the key in 1924, he envisioned a development that included shopping, restaurants, fine homes, and art. Although the Great Depression prevented him from seeing this dream become a reality, in 1945 the development was resurrected and John’s island community is still enjoyed to this day.

In 2001 Harding Circle was added to the The National Register of Historic Places. John’s original vision included a winter residence for the President of the United States, which inspired the street names and the original name for the circle. 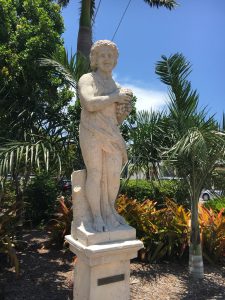 In addition to the vision for the keys, John also donated the first statues from his personal collection. We have compiled a list of the remaining statues that were donated by John and their current location. In 2007 the Save Our Statues initiative brought together a group of concerned citizens and organizations to preserve those original statues and add 21 new pieces to the circle.

St. Armand’s Circle is also home to the Circus Ring of Fame. Started in 1987, this installation honors people from all over the world who have made significant contributions to circus arts. The Ring is perfectly placed under the watchful eye of the John Ringling statue.