Nobody’s Listening is a sculpture by Jack Cartlidge that stands at Sarasota City Hall. This piece has been in the City’s public art collection since 1967 when it was commissioned by architect Jack West to placed on the grounds of the new City Hall.

Jack Cartlidge was an art professor at New College of Florida who used a unique sculpture technique called repoussé. This involved  creating a metal armature that was covered in hammered and welded copper to create a lightweight sculpture that mimicked bronze. Nobody’s Listening is his first piece using this technique which he then used on many other pieces of public art throughout Sarasota. 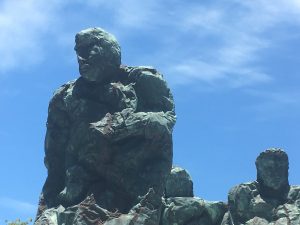 At the same time that Cartlidge was creating his large copper pieces, Jack West was designing modern buildings as part of the architectural philosophy referred to as the Sarasota School of Architecture or Sarasota Modern. Jack West and Jack Cartlidge often worked together appreciating the way their different styles complimented each other. The clean straight lines of the building were perfectly juxtaposed to the hammered copper of the sculptures. 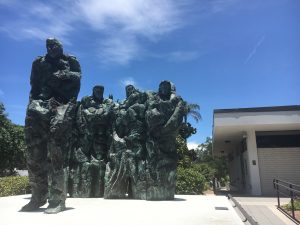 In addition to Nobody’s Listening, Cartlidge’s The Guardian and Pioneer Family Hears A Sound, Is it Bears or Billy Bowlegs? were both added to the grounds of City Hall in 1983.