Photon II was created by Dennis Kowal in 2000 and acquired by the City of Sarasota in 2002. This 9′ tall aluminum sculpture stands between the bay and the Van Wezel Performing Arts Hall. 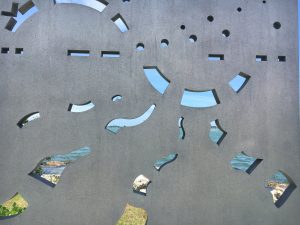 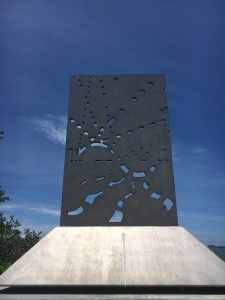 Photon II has received many accolades and even represents Sarasota throughout the world! In 2007, the City of Sarasota chose to give prototypes of this work to all eight of its sister cities Treviso, Italy; Hamilton, Ontario, Canada; Perpignan, France; Vladimir, Russia; Telmond, Israel; Dunfermine, Scotland; Siming, Xiamen, China; and Merida, Mexico.

Image from ‘Bridges to the World: Newsletter of the Sarasota Sister Cities Association’, July 2007

On his website, Kowal states the his works, “while monumental and archetypical, demonstrate respect for human scale. They are classic and symbolic, sensual and intuitive. His sculptures manifest convergence of matter, both real and imaginary, science and technology, illustrating persistent life affirming creative energy.”